BY THE NUMBERS: Attacks and Threats Against Journalists 2016

THE YEAR 2016 was not much different from other years past for journalists and media workers. Though officially the norm, press freedom was besieged by continuing impunity in the killing of journalists, by other threats and attacks as well as existing legal limits.

Three journalists were killed in the line of duty in 2016 bringing the total number of journalists killed since 1986 to 153. Two were slain in the remaining six months of the term of President Benigno Aquino III, the numbers sums up to a total of 31 journalists killed during his six year term. One journalist was killed before the year ended, falling under the watch of the newly elected president who took office in July.

Enemies of press freedom have since silenced members of the media not only through filing libel suits and harassment. In 2016, three journalists were silenced by the gun:

On February 16, broadcaster Elvis Ordaniza of the Pagadian City-based dxWO Power 99 FM station was preparing dinner when a lone gunman barged into his house and shot him twice in the chest. The reporter was rushed to the hospital but was declared dead on arrival.

Pedong Tolentino, the host of the blocktime program for which Ordaniza was a reporter, said the broadcaster had been reporting and commenting on illegal drugs and illegal gambling in Pitogo town before he was killed.

On the night of May 27, Alex Balcoba, a reporter and columnist of the tabloid People’s Brigada and an official of the Manila Police District Press Corps, was shot in the head in front of his family-owned watch repair shop in  Quezon Boulevard, Quiapo district. The assailant then walked towards a parked motorcycle where a companion was waiting. The two then fled. Balcoba died at the Jose Reyes Medical Center.

Larry Que, a local businessman, was publishing the newspaper Catanduanes News Now two weeks before he was shot by an unidentified gunman. Que was about to enter a building in which an insurance company he owned has an office when a man wearing a helmet and a raincoat approached him and shot him in the head. He was rushed to the Eastern Bicol Medical Center but died the next day.

Que wrote a column in the December 13 to 19 issue of Catanduanes News Now criticizing the alleged indifference of local officials to the manufacturing of illegal drugs in the island. His column also claimed that foreigners who had set up drug facilities in Catanduanes had been helped by local residents.

Apart from the killings, CMFR recorded 28 incidents of attacks and threats against journalists and news organizations in 2016 while there were only 18 reported incidents in 2015. These instances range from preventing a journalist to cover an event to shooting a radio reporter.

The number of online threats and attacks against journalists and news organizations also increased in 2016 especially after Duterte was sworn in as the country’s 16th president. Journalists whose reports were critical of the new administration have been the subject of bullying and personal attacks online.

BY REGION, BY MEDIUM

Seven incidents of attacks and threats happened in the National Capital Region (NCR), the highest compared to any other region in 2016. Five incidents happened in CARAGA (Region XII); four in the Davao region (Region X) and another four in SOCCKSARGEN (Region XII). NCR has been perceived as a safer area for journalists compared to the provinces; but journalists working in the area have become more vulnerable as experienced in certain years. Fifteen incidents were recorded in 2013 and eight in 2015.

WHERE WERE
THE JOURNALISTS
ATTACKED OR
THREATENED?

Of the 28 incidents during the year, 15 were against radio workers. Journalists working in radio were more prone to threats especially in the provinces where people listen to them during siesta and at night. According to VERA File’s “Media Ownership Monitor,” radio is next to television as a source of political information in the country. About 65.6 percent of Filipinos listen to radio, 41.4 percent listen to the radio once a week.

WHO WERE
THE TARGETS
OF ATTACKS
AND THREATS?

4%
This year, CMFR recorded three slay attempts and two strafing incidents. All were directed at radio workers, three of whom were blocktimers or those who purchase airtime from radio stations to air their programs. Usually, they pay for the “blocktime” through advertisers or sponsors, some of whom are politicians.

HOW WERE
JOURNALISTS/
MEDIA WORKERS
ATTACKED OR THREATENED?

Criminal libel remains one of the most frequently used ways to suppress the free press in the country. Five libel related cases were reported to CMFR.  A libel charge filed in 2015 led to a journalist’s arrest in 2016. Four libel suits against journalists were filed in 2016; only two, so far, have led to arrests.

Libel is still a criminal offense in the Philippines despite calls for its decriminalization. The fear of possible detention and imposition of hefty fines has on many occasions silenced press criticism of government officials and even reporting of matters of public interest. There were instances when officers serve warrants of arrest late on Fridays so journalists have less time to arrange for bail and have to be detained for the weekend.

In the case of Radyo Bombo 99.5 station manager Bong Encarnacion, he was arrested for libel on September 9, Friday. The arrest was based on a libel charge filed by Makilala Mayor Rudy Caoagdan. Caoagdan filed the charges after Encarnacion criticized his administration for several anomalies in the municipality. Encarnacion was able to post bail immediately.

Three days after his arrest, he was once again arrested for a separate libel case filed by Caoagdan. The radio manager was held in the NBI office but was released on September 14 after he posted bail.

Some government officials exploit criminal libel by filing several libel suits to a journalist they wanted to silence.

Though there was an increase in the number of reported incidents of violence against journalists from the previous year; these incidents were not election related.  Of the twelve incidents recorded during the campaign period (February to May); but only four of these were election-related.

In the 2013 mid-term elections, there were 66 reported incidents excluding the killings. Twenty-five of these were election-related, the highest number of poll-related attacks and threats against the press in an election year. The figure was even higher than the total number of election-related alerts from 2007 (nine incidents), 2010 (five incidents) and 2016 combined.

NO. OF
THREATS AND ATTACKS
AGAINST JOURNALISTS
IN THE PAST FOUR
ELECTION YEARS?

One of the election-related incidents this year happened in Muntinlupa City, Metro Manila. Producer and commentator of Kilatis Int’l Online TV Kit Lagare, dwAD reporter Malou Cabahug and dzXL reporter Pol Baral were looking for vote-buying stories on May 7 when they chanced upon a group of people having a meeting along a street in Brgy. Poblacion.

The group, which was later identified as supporters of now Mayor Jaime Fresnedi, turned on the members of the media and started a commotion. The police arrived to stop the incident and brought the media people to a police station for their protection. 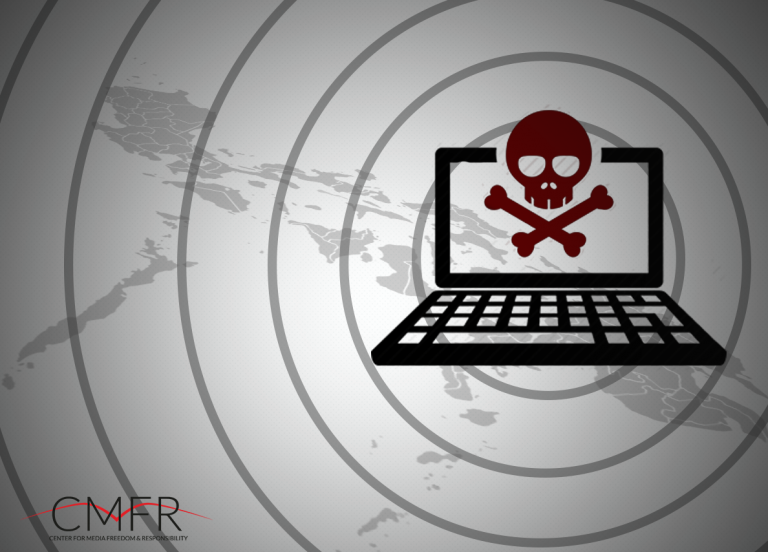 ATTACKS AND THREATS AGAINST JOURNALISTS ONLINE

Since 1986, 153 journalists have been killed, many after receiving death threats, and scores harassed and physically assaulted, for reporting and commenting on such issues of public concern as corruption and criminality. In this country, violence against journalists is real and it goes unpunished, as often, it involves those who have power in local communities.

It started as early as the campaign. Journalists critical of anything about then candidate Rodrigo Duterte were savaged on social media and it has not stopped.  Duterte’s defenders rain specific threats, rape, murder and libel suits, including harm to members of the journalist’s family.

Victims of cyberbullying included Manny Mogato and Karen Lema of the British news agency Reuters, who were accused by Duterte partisans of distorting his controversial “Hitler” comments. Lema and Mogato wrote on September 30 Reuters report “Philippines’ Duterte likens himself to Hitler, wants to kill millions of drug addicts.” The article discussed Duterte’s remarks before the media during a press conference in Davao City after his visit to Vietnam in which he told reporters that critics had been portraying him as “some cousin of Hitler,” that he would be happy to “slaughter” three million drug addicts, and that “At least if Germany had Hitler, the Philippines would have, you know, my victims.”

The report, which was also aggregated from Reuters by at least two online news sites, received a lot of negative feedback from the president’s supporters.  An online mob of angry Duterte followers deluged social media with memes, comments and other posts calling the journalists “malicious and irresponsible,” “blunderers” and “attention-seekers” among others.

CMFR filed an alert on two cases of online bullying, although such harassment was also experienced by many others on their personal social media accounts.

Al Jazeera correspondent Jamela Alindogan-Caudron, who has been reporting on President Duterte’s anti-drug campaign and clashes between the Armed Forces of the Philippines (AFP) and the Abu Sayyaf Group (ASG), was also attacked by online Duterte partisans.  Alindogan-Caudron and Malalad were called names such as “traitor,” “bayaran” (paid journalist) and “presstitute.”  Some comments even suggested that the two journalists should be raped or killed by the ASG, for their reports. The ASG has been notorious for the violent treatment of their victims.

On September 22, President Duterte addressed concerns that have been raised over some of his supporters’ online tirades.  “I appreciate very much your support and – how would I say it – enthusiasm to back me up…You are correct. I am doing nothing wrong,” Duterte said. “But of course, we should also not threaten people because they won’t be able to write about the truth.”  The appeal seems to have gone unheard or unheeded as threats have continued.

As journalist and media advocacy groups have learned from bitter experience, any threat of physical harm against journalists must be taken seriously.  Such threats have in many instances been the prelude to journalists being killed and constitute a grave peril to the constitutionally protected right of the press to perform their mandated tasks of providing news and commentary.

A Rappler article by Maria Ressa “Propaganda War: Weaponizing the Internet” noted the pivotal use of the social media in the Duterte campaign for presidency.  The management of social media allowed the wide use of content to promote the candidate and to suppress criticism against him. Just two months after Duterte assumed the presidency, the same machinery was used for propaganda, including the use of threats.

The intimidation of journalists amounts to online terrorism that also detracts from the reasoned discourse needed in a democracy.  CMFR recognizes the power of social media to expand the arena of debate and exchange, to enhance through unfettered expression the impact of ideas that mobilize progressive movements.  It decries the use of these same instruments to amplify a campaign to suppress free and fair criticism of elected leaders.

We call for more than a token attempt on the part of the administration to rein in its supporters’ unconscionable attempts to demonize even some of the most seasoned media practitioners in this country whose only offense has been to report the truth.

The Manila-based Philippine Center for Investigative Journalism (PCIJ) reported an attack on its websites — www.pcij.org and www.pcij.org/blog on July 29.

Prior to the attack, PCIJ published reports on the Duterte administration’s war on drugs, as well as advisories on citizen’s rights during police operations and custodial investigation based on primers by the Free Legal Assistance Group. PCIJ, a member of the Right to Know, Right Now! Coalition, also posted the latter’s statement lauding the executive order on Freedom of Information signed by President Rodrigo Duterte last July 23.

PCIJ on its Facebook page said “A phrase with explicit curse and threat has been written by the attackers into our stories.”