All Eyes on Comelec

THE ELECTIONS of 2019 should be remembered for the glitches which were left unexplained, and their significance dismissed by the Commission on Elections (Comelec) eager to claim another electoral success.

But “glitches” did mar the May 13 elections, triggering dismay as well as speculation about foul play.

The Filipino’s faith in the automated ballot was boosted in 2010 and in 2016 with the stunning speed of the transmission and announcement of results.

But on the fourth run, the exercise showed up procedural lapses early in the day. Irregularities riddled the midterm polls from the casting, canvassing and transmission of votes.

After the smooth implementation of the three previous elections, it was difficult to find a credible explanation for the seven-hour-blackout on the transmission of consolidated numbers to the media and to election watchdog groups.

President Rodrigo Duterte had by then appointed four of the seven members of Comelec which raised the lack of due diligence and slack preparation as paramount concerns. Comelec is an independent constitutional body, but politics has had a way of raising questions about the conduct of polls in the past, a matter that seemed to have become less of a concern given automation. 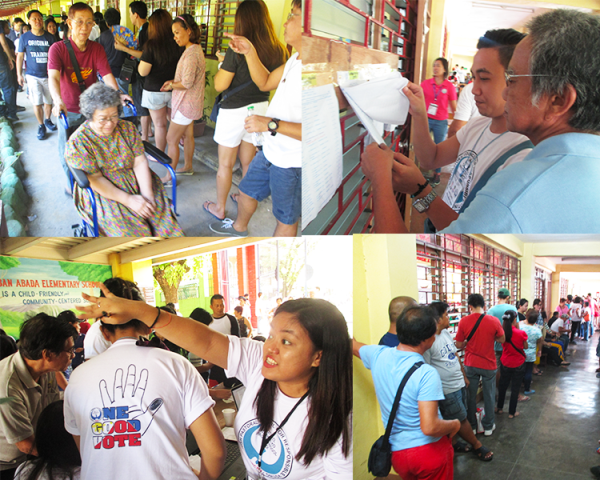 The disruption of the flow of election data at around six in the evening was questioned by reporters. The media took care to air Comelec’s statements, which attempted to allay fears of cheating. But the extensive coverage failed to give an adequate explanation about what caused the glitches or even how they happened.

Calls for transparency rose quickly from civil society organizations (CSOs), militant groups and poll watchdogs; these were included in the post-election reports.

Shifting their focus to the proclamation of winners, media left serious questions about the blackout still unanswered and seemed to dismiss the grave concerns about the credibility of the exercise as a whole. Journalists seemed satisfied with the poll body’s claim that a “bottleneck” caused the transmission delay, an explanation which did not placate critics who knew more about the technical side of the process.

Did it have an impact on the results of the vote, particularly for the Senate? As it takes long years to settle electoral protests, a larger issue should have served as the focus of media’s inquiry. Comelec’s accountability for every aspect of the polls was sidelined by the coverage. Did Comelec oversee the elections with integrity and transparency? The agency charged with the conduct of the polls was not subjected to any media investigation.

In a monitor on the Election Day coverage, CMFR noted that while the media attempted to look into the delay in the transmission of data, they failed to explain “the system bug” that caused the snafu. Journalists did not have on hand any independent source who had the know-how to explain this in layman’s terms. With a few exceptions, most media were at a loss in making sense of Comelec’s statements.

HOW THE TRANSMISION OPERATES ACCORDING TO COMELEC? 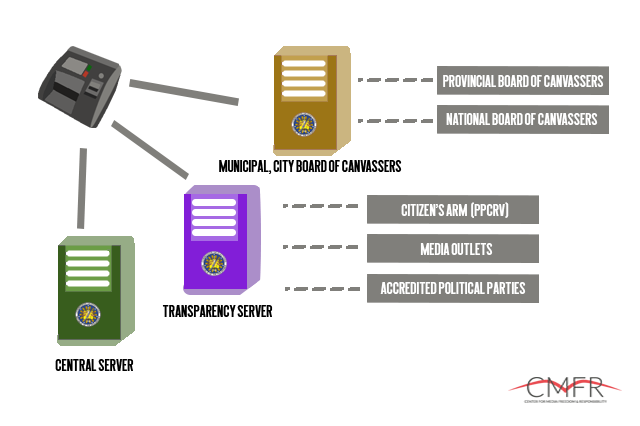 Comelec Spokesperson James Jimenez faced reporters by 11:30 p.m. on May 13. The press conference was covered live by all television networks. Jimenez said he had asked the Comelec to meet en banc to release Comelec’s error logs as this would explain the cause of the delay.

The statement did not provide an answer and the media did not ask for more information.  Even after Election Day, most media seemed stuck with Comelec’s position that the problems were all minor.

On May 16, a more serious charge came to light. Poll watchdogs alleged the existence of Comelec’s undeclared server otherwise known as a “meet-me-room” that reportedly caused the unexplained transmission delay.

At the Kapihan on May 15, election lawyer George Garcia said that the Comelec had operated a “meet-me-room” which he described as a queue server to ensure the smooth flow of data.

Primetime newscasts that evening reported the development but did not indicate the implications of Comelec’s use of the “meet-me-room.”

Later the same day, ANC’s Future Perfect featured as a guest the spokesperson of the long-time poll watch group Automated Election System Watch (AES Watch). Nelson Celis said that “meet-me-room” servers are against the Omnibus Election Code. “In the Omnibus Election Code, sa manual elections natin, the ballot box goes directly to the municipal board of canvassing. In this case, may intervention, iyong queuing server. It’s not following the omnibus election law,” Celis said. He added that even if Comelec has an explanation for it, “meet-me-rooms” with undeclared servers are still illegal.

The point of the law cited by Celis is its prohibition of any disruption or detour in the flow of transmission. Obviously, there was a disruption as seen in the delay of vote counts relayed to the transparency servers. These revelations point to the queue server as having disrupted the mandated free flow of information from source to the public. Celis took the position that it was illegal to have allowed the automated vote to pass through “meet- me-rooms” before moving on to canvassers and transparency servers.

The media did not pursue the issue. Celis’ views were not followed up in subsequent reports.

On May 16, in an effort to dismiss the question of its allegedly illegal action, Comelec denied that the “meet-me-room” caused the delay; blaming it instead on a “bottleneck” or avalanche of data inflow to the server. On May 20, PPCRV complicated the issue even further when its chair Myla Villanueva said that based on their audit, data was coming in during the delay when the transparency server went blank.

Media reported the confirmation but did not point out that while data was flowing, these were not consolidated and could not satisfy the doubts raised about the impact of the disruption on the final counts of the votes.

Media Out of their depth

Media’s lack of understanding of the technological issues may be understandable. But this does not excuse their failure to consult sources whose views could have helped the public appreciate the gravity of the issue.

Most reporters allowed resource persons and sources to throw around terms with little effort to understand the meaning of the terms.

The flawed coverage revealed media’s limitations and lack of preparation for the challenge of automated elections. Caught by surprise, TV’s late night reports did not even know who they could call to help clarify what Comelec officials were saying. On the technicalities of automated transmission of data, only the experts could detect the misleading claim and question it.

Even from the start, experts had warned that automation can help prevent cheating or fraud, but if there is any intent to cheat, it can be done and it can be done wholesale. No report bothered to connect the dots to the introduction of the meeting room.

Automation requires that journalists know a little more about how the machine can be manipulated, see a glitch for what it might suggest or imply.

“I would like to advise Comelec now, hindi ko na lang hintayin (I won’t delay this). Dispose of that Smartmatic and look for a new one that is free of fraud…Kasi ang Liberal (Party) sabi nila nadaya sila. Ako, sabi nila nadaya rin. (Because the Liberal Party says they were cheated. Me, they said I was cheated too.) You know it’s creating an environment of hostile attitude against that Smartmatic…You have 3 years. Kakatapos lang ng election (The elections just ended). Palitan na ninyo kasi (Change it because) it is no longer acceptable to me, to the people, and even to the congressmen who are here.”

President Rodrigo Duterte said on May 30, 2019 in front of a Filipino audience in Tokyo, Japan.